Three weeks into the second term, nearly half-way through, and I haven’t written anything yet. Too much college, work, theatre and Pepys. I wasn’t looking forward to returning to college. I’m not sure why, maybe just too settled in to spending time at home over Christmas, but as soon as I got back it was like I’d never been away. However, this term has been very difficult so far.

The main idea this term is using other art forms — art, poetry, music, architecture, etc — as inspiration for creating theatre. Although I was quite hopeful, feeling comfortable with all this stuff (apart from poetry), so far I Just Don’t Get It. Let’s start with colour.

We had several classes centered around interpreting colours. eg, how would red move? I had no idea. And still don’t. My relationship with colour is awkward, rather a handicap for someone who dabbles with design and the reason so many of my designs are far from colourful. While I’m happy working with shapes and information, the choice of colour seems largely random. I like some colour combinations better than others but rarely have a good reason to choose one over another, let alone have any idea where to start.

I gave it a go at first, trying to move like, say, purple or orange, but it felt so forced, like I was just playing along for the sake of it. I didn’t feel or believe anything I did although most other people seemd fine with what they were doing. It didn’t help that a couple of teachers seemed to have very set ideas about how we should react to each colour, almost guiding us to the “correct” answer. Kind of “there’s no right answer, but maybe green is like this…” This annoyed me, like it was some secret language that (a) I had no faith in being true and universal and (b) no audience would understand, and so what’s the point in knowing it.

But how come most people are going along with it all, and I find it impossible? I thought at first that people were reacting solely to the darkness/lightness of the colours. For example, when we listened to a piece of music, writing down what colours it made us think of, most people chose indigo for the sustained opening bass note. See, the teacher seemed to say, see, there is a common language, something primal, behind all this, you all picked indigo! Hmm. I think that yes, we tend to associate darkness with lower notes, and indigo (a colour that many in class couldn’t have identified a few days earlier) was merely the darkest in the limited vocabulary of rainbow colours we’d been using up till then.

Was there more to this than solely dark/light? I thought that maybe people were also reacting to the temperature of colours, the reds, oranges and yellows always moving more “lively” than the cooler shades. Perhaps it was just a translation of hot and cold into movement, rather than colour.

But with both dark/light and temperature, that probably amounts to a decent basis of colour and I’m back where I started and none the wiser as to my immobility in the face of a rainbow.

We’ve since moved on from colours and are now looking at paintings and creating tiny pieces, little more than a single movement, inpsired by the paintings’ colours, perspective, texture, light and shade, “presence”, etc. Well, everyone else is, but I’m still confused. I love painting but I’m finding it hard to think of a single time when a piece of art has made me want to move in any way. I simply stare at the Velasquez, Turner, whatever, immobile, wondering where everyone else got the inspiration to do whatever strange movements they’re currently doing. It’s a step away from dancing about architecture, the reknowned description of an impossible and pointless activity.

There’s one aspect in particular I’ve been battling with. We’re definitely not supposed to recreate the painting, positioning ourselves where there are people in the painting. To some extent we’re supposed to ignore what the painting is about and focus on the colours, lighting, etc. But, but, if we ignore the about of the painting completely, we’re merely looking at it as an arrangement of coloured areas in a rectangle, some kind of extreme structuralist view where the subject is but a means to the end result. It’s obvious that no one is taking it this far — we have to look at the lighting in the scene, or the perspective, and people may use the implied movement of painted sea or clouds, all of which are from the aboutness of the painting rather than just the arrangement of pigments on canvas. 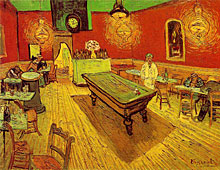 For example, in one class we looked at Van Gogh’s The Night Café. Yes, I was struck by the redness and the one point perspective, but what had the biggest effect on me was this one guy in white, standing, staring at the painter/viewer while everyone else is occupied, sitting at tables. With the overbearing colour and the uneasiness it’s like a scene from a David Lynch movie, but I had no idea how to create a movement with a few classmates, other than by putting them in the positions shown in the painting. This seems very “wrong”, too literally focused on the about and not what we’re supposed to do, but the picture as an image of a real-life subject, of a scene that affects people, has more impact on me in terms of movement than its colour or technique.

(Abstract art is another matter entirely, and I’m not sure whether I’d find it easier or harder in terms of this kind of task. I certainly have problems with abstract art aesthetically, and rarely get anything out of it unless I know a lot about the artist and their intentions. After years of art school I’ve ended up liking paintings in which I can tell what the subject is. This feels decidedly philistine but there we go.)

So, I’m not relishing the next four weeks. While I’m still putting my trust in the teachers that we’ll feel the benefit of this in the future when we’re doing some actual acting (oh you’ve no idea how much I long to see a script), I’m dreading the same daily feeling of cluelessness. It all feels very Emperor’s New Clothes, as we’re shown today’s painting and people exclaim “ooh” and “wow” (which, frankly, is more enthusiasm than I can trust) and then throw themselves into some movement while I stand there, admiring the painting, sure, but standing stock still, useless.

I’m plodding on, mustering my enthusiasm every day, clinging to the occasional moments when, yes, I can see something emotional and moving happening, the glimmer of actual theatre being squeezed out from these exercises, assuming, hoping that it will all get better before too long.