The other day I asked on Twitter whether anyone could recommend a good kettle. I didn’t expect much but ended up with lots of suggestions, many for kettles I hadn’t seen before. So I thought I’d share them here.

(See the update from 2018 at the end to find out what kettle we ended up buying.)

Anyone got a kettle they really like? We need a new one. I’m not sure one can feel excited about a kettle but they’re all a bit mehhhhh.

Our current kettle, a chrome Kenwood, dribbles when pouring, although it was fine for most of its life (15+ years). Our criteria for a new one:

I was quite keen on a variable temperature kettle – less-than-boiling is better for coffee – but not at the expense of the other criteria.

We made targeted strikes on a few department stores and came away uninspired. Most kettles were ugly or boring or both. So, to Twitter!

As Peter Merholz reminded me the first stop for recommendations should be The Sweethome, and their top pick is: 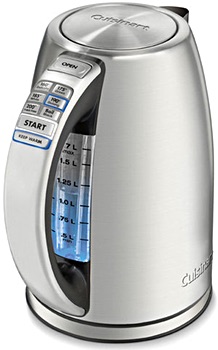 It’s about £70, which seems a bit much for a water-boiler, and that button-filled handle looks a bit too Star Trek for my taste. Variable temperatures and a Sweethome recommendation sound good, but reviews on Amazon say the kettle’s blue light stays on all the time, even when it’s not boiling, which puts me right off.

This is ours: https://www.amazon.com/Oster-2-Liter-… Inexpensive, use it everyday, doesn’t make us angry, does what you want.

I should have added “doesn’t make us angry” to my list of requirements. 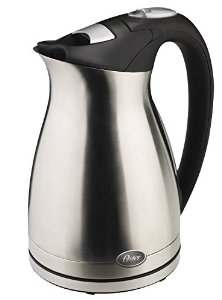 It looks interesting but I’m a bit put off that when I try and visit Oster’s page for this kettle I’m redirected to the front of osterblenders.co.uk. It’s not for us Britons, obviously.

I’m keen on our purple kenwood kettle, it feels right, might be discontinued. Also Severin WK 3389 great for ppl with arthritis

I hadn’t heard of Severin (“Tasteful Technology”) but they do some fairly simple-looking kettles. And that WK 3389 is a pleasing shape: 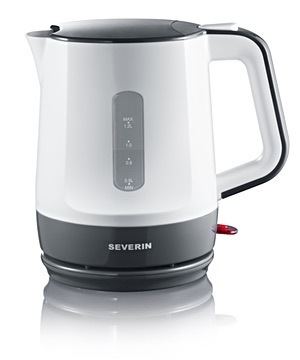 Here’s the first of those:

About £50. Another, private, correspondent said of their De’Longhi Icona, “it hasn’t broken and boils water”. Aside from these important criteria, I’m not crazy about the design.

You could say that this style is not my… wait for it… cup of tea.

I couldn’t resist that any longer.

we’re ridiculously happy with our Breville Tea Maker. It’s a bit over the top but has been making several pots a day for 2+ yrs. 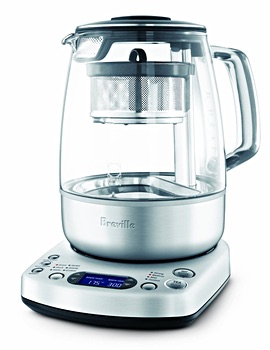 This “revolutionary tea experience” (also the strapline of the Boston Tea Party) looks fairly clean and simple if you only need hot water for tea. But we need it for coffee and for boiling water for cooking (quicker than a saucepan). It also appears to cost about £200. So, no.

A private correspondent admired the look of the Skandium Emma kettle, although they hadn’t used it: 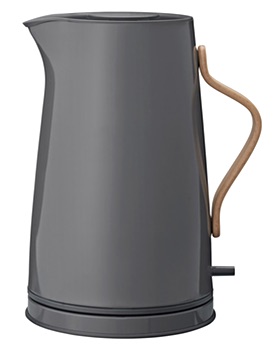 It does look classy, as you’d hope for £120. My first thought was that the handle looks like it’d break off easily, but that’s based on no evidence. Only 1.2 litres and no details on the wattage, but still desirable.

here’s an electric kettle with a pleasing form http://www.muji.eu/pages/online.a… - N.B I have no personal experience of this kettle 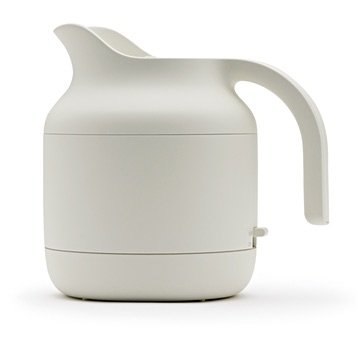 Nice to see something that’s not metal or glossy plastic, but £60 seems a lot for such a small kettle (0.5 litres).

I have this kettle. It’s very pleasing to look at and use: http://www.davidmellordesign.com/cooking-and-ba… 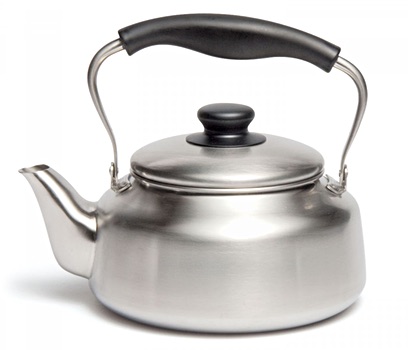 I can imagine this £90 kettle is very satisfying but we’re planning to stick with a kettle powered directly by electricity.

While we’re on the topic, Tom Coates suggested:

I have the oxo good grips stove top one and I like it a lot, but I’m not a huge kettle user 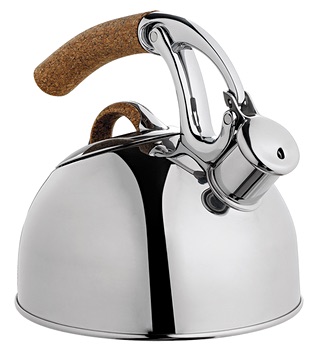 I do love the ease and comfort of OXO products but, leaving aside it being a stove-top, it doesn’t appear to be available in the UK. It’s about US$50.

I don’t feel strongly about it, but this has been alright http://www.johnlewis.com/russell-hobbs… 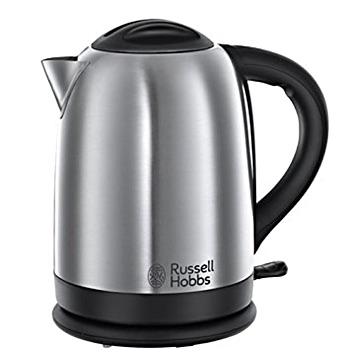 That looks perfectly fine. About £20, 1.7 litres, 2400 watts. Probably just the kind of thing we’d buy unless this exhausting search turns up something that ticks all the boxes in a better way. 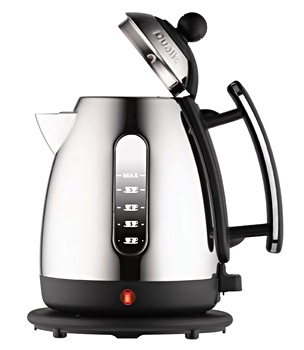 Dualit’s toasters seem to have a great reputation so I’m interested in their kettles. But for some reason I’m not keen on that handle. Otherwise though, it’s 1.5 litres and 3000 watts for £50+ so sounds good if you like the look of it.

Very late to this, but the Burco 2 litre catering kettle is good. Just a plain old un-fancy kettle. 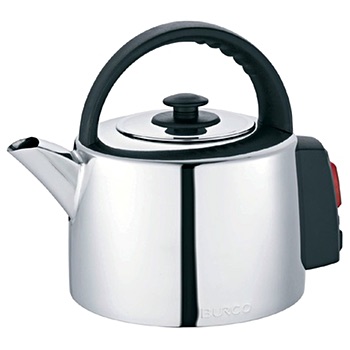 That’s an interesting idea. Something designed to Just Work for industry. Nothing fancy. £50. Also available in a 4 litre version if you really like your tea. However its claimed “5 minute heat up time” is double that of a lot of domestic kettles. 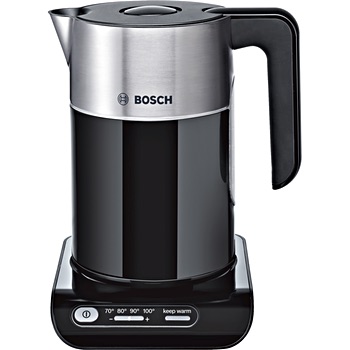 I’d seen this before, when looking for variable-temperature kettles, as there aren’t many options. It’s around £45. I quite like the cylindrical business-like design but find the size of the base a bit off-putting. I guess it keeps the kettle itself simpler, unlike that Cuisinart we saw first, or this alternative, also from Bosch: 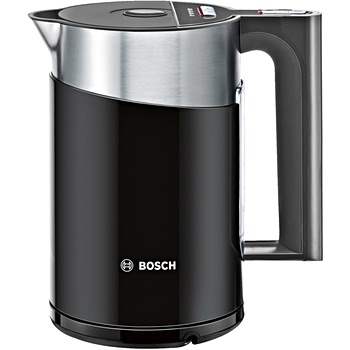 Finally, a private correspondent reminded me to look at Which?. You have to pay to see their exhaustive reviews, although if you cancel after a month you’ve only spent £1… so I signed up again.

I find Which? of varying use… I’d never consult them when looking for something like a laptop or a camera. And sometimes their domestic appliance reviews are frustrating because the things they’ve reviewed are never available. Partly because the manufacturers do their best to confuse everyone with their product numbering and availabilities in different stores.

But kettle reviews seem more practical. Although, as usual, Which?’s priorities — some might say “obsessions” — are often different to mine. For example, they seem very interested in how easy or hard it is to clean inside a kettle. Is that something you’re supposed to do?

It’s also interesting to read the reviews from users. Although Which? rate the Dualit kettles (seen above) extremely highly, there are lots of people complaining about theirs leaking from around the water level indicator. Another, the Russell Hobbs Buckingham was found to be extremely quiet… except the user reviews are full of people complaining that it gets noisy after a few months. Of course, one has to balance user reviews — people who are quietly satisfied rarely seem to review their products.

Anyway, one kettle I hadn’t seen before that I like the look of is the Bosch TWK6A1031GB (catchy!): 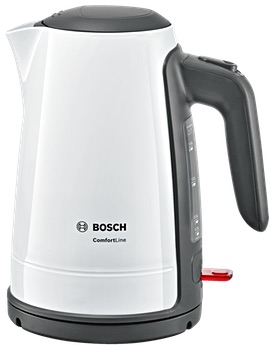 That rated well (80%), looks a bit different but not stupid, is 3100 watts, and costs £40. It also has a good limescale filter, one of Which?’s obsessions which, this time, coincides with our needs given the hardness of London’s water.

That’s about it. I’m not sure which to get yet but we have a different, and more interesting, shortlist than before I asked Twitter. So thanks everyone!

UPDATE: I kept meaning to update this with what kettle we eventually bought, and it was… 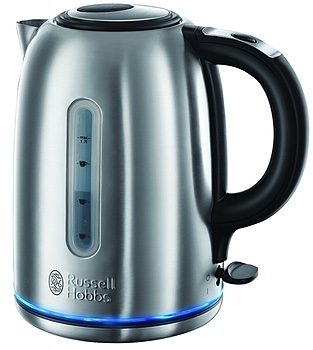 Having given up on a variable temperature kettle, we decided on this as a good balance of looking quite nice (a bit nicer than the Russell Hobbs Oxford, above), 1.7 litre capacity, 3000W, and apparently being quiet. Around £30–35.

We still like it, 18 months later. It has a nice blue light around the base when it’s boiling, has a measuring scale on both sides, the top flips open with a press of the thumb, and it pours well. The boiling might have got louder over time, as some suggest it does; it’s hard to compare over so long, and it’s not loud enough to seem odd. And it boils quickly. Reviews on Amazon are variable, but we haven’t had any of the problems some people there have had. The lid button does feel a bit flimsy, but it’s still working fine for us. (11 May 2018.)