Back in the mid-90s, when I used to go out, I went to an evening called The Shaolin Film Club two or three times. Twenty years on and it barely exists online, even as a phrase. So I thought I’d aggregate what I have so that this ephemeral thing lives a little longer.

(Be sure to see the updates further down for more from one of the night’s founders and other finds.)

Because I’m a selective hoarder I discovered I still have my membership card, which I think got me £1 off subsequent admissions. 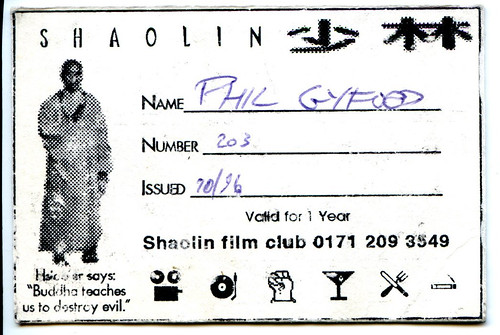 I also found an email from a friend describing one of the nights in 1996:

148 Charing Cross Road above the book case. Tottenham Ct Tube it’s right on the corner, the building with the huge book mural on it.

I’m not sure if that’s written by my friend or whoever ran the club. But it gives an idea of the flavour. I must have gone at least twice as I also remember seeing a Lone Wolf and Cub film there. I should add that it’s not like I’m a huge fan of these films, and probably haven’t seen any apart from those I saw at the Shaolin Film Club. But it was an interesting, friendly and fun place to go.

I can only find one person on the web describing going, AshRa posting in a Kung-Fu Films thread at Dissensus on 13 June 2005:

Did anybody used to go to the Shaolin film club in London around ‘95 - 2000…? The main venue was upstairs in a disused building at the top of Charing Cross Road (seem to remember it was pretty near Silverfish but i’ve not been back to London for years and my memory is failing!) They would show a shaolin double bill interspersed with Tekken tournaments plus music & food (CUP NOODLES!) in another room.

It was my favourite night out for ages when I lived down there but it disappeared for a while and came back to club 333 for a couple of nights, but the magic just wasn’t there any more!

And, for completeness, here’s Matthew Presley in the rec.music.hip-hop Usenet newsgroup asking about it on 18 September 1998:

This is for Uk headz…..sorry everyone else..
Anyone in London know about Shaolin Film Club.
Like a Hip-hop club with Martial arts flicks etc…
Later…..
Mp.

148 Charing Cross Road no longer exists — it was flattened to make way for Crossrail. It used to be the northern-most shop on the eastern side before you got to Centre Point. The closest photo to 1996 I could find was from 2008’s Google Street View sweep, when “the book case” had made way for Mr Topper’s haircuts and, downstairs, Orbital Comics. Although both may have left the building by 2008. 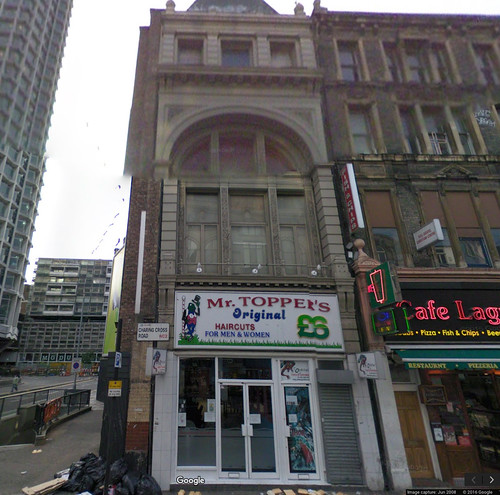 The Shaolin nights were on the first floor of the Victorian(?) building. The front room, overlooking Charing Cross Road, had the “retro arcade” set up around the edges, a DJ, and cans of drink and noodles for sale. The back room, which I remember being larger, had the films projected towards the back wall, with chairs set up for the audience. Between and/or before the films, Tekken (according to AshRa) was projected instead.

The only other mentions I can find now include a record of the Shaolin Film Club being awarded a grant of £4,050 by Arts Council England on 19 March 1997.

A night exploring the crossover between film, music and graphics with influential film scores set against a diverse backdrop of contemporary soundscapes. Contributors to the night include Faze Action’s Simon Lee, David Arnold and The Shaolin Film Club. This night runs in conjunction with Ocularis, a multi-media experience at The Lux (box office 0171 684 0201).

…in the early days off the 333 i attended on a regular basis at the time there was a regular Hip Hop breaks night at this club which i used to attend which had a DJ named 33 1/3 other nights i attended included “OMSK” and the “Shaolin film club” at which my Kung fu teacher did a Kung Fu demostration.

Ben Slotover, one of the organisers of Shaolin Film Club, came across this page and got in touch with some reminiscences, a PDF, and some videos. He said:

I just saw your blog post about Shaolin while googling to see if anyone has ever mentioned it. I was the co-organiser with my mate Giuseppe before he went to live in Mexico and subsequently disappeared. Always wondered what happened to him.

Anyway your write-up is appreciated. We existed just before the Internet reached everyone’s homes (and phones,) and while we did have a basic website that’s long gone now. I went on to join Exploding Cinema which is still going strong but I have fond memories of those Shaolin shows.

We wanted to do a night in the West End that was inclusive and fun without the snobbery of a nightclub and which offered more than just a cinema visit. As you can imagine the workload was crazy. That location in Charing cross road had literally nothing but a toilet and a power socket so everything including the bar, the chairs, projection and sound system, fighting games and the ‘retro arcade’ had to be brought for every show. Added to that was the (paper!) Mailing list, membership and prizes etc making the show a labour of love rather than a workable commercial enterprise.

I still have a bunch of mementoes including posters, flyers, newsletters and our own re-branded ‘Shaolin beer’ that we bought on booze runs to Calais. We had no alcohol license, no public entertainment license, no insurance, no fire provision, everything cash in hand, we paid no fees to the film rights holders… It’s a miracle we didn’t end up in prison.

Anyway, the dodgy geezer who rented us the rooms in Charing cross road eventually got kicked out and we put on a couple more nights around London to diminishing audiences before quitting while we were ahead.

Ben sent “a PDF of a web page we put on our last site in which I gathered all the old reviews of all the films we put on. These were originally written by me for the newsletter/flyers that were posted out. It was before the days where one could just cut and paste paragraphs from the IMDB.” View the PDF. Here’s a preview: 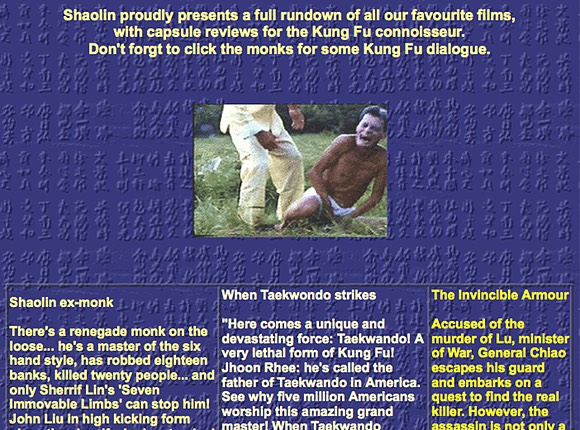 On to the videos… The first is a promo they put together:

Then there’s footage from a 1996 Shaolin Film Club night at the Charing Cross Road venue:

And finally more footage this time from a show in 1997 “in a place above a pine furniture shop in Kings Cross (also now demolished)”:

Thanks for all this Ben!

First, from a page about 1998’s Volcano Film Festival:

Attracting a more youthful audience, Wednesday saw Ben and Jap of Shaolin do their show at The Foundry near Fleet Street. Along with the showcase of obscure Kung Fu movies one of the things that distinguishes Shaolin are the live computer fighting games which are projected on a big screen. An amphitheatre of virtual combat; is this some kind of nascent ritual resolution of male aggression…?

And then this archived copy of a page from early cybercafe Backspace’s site about 2000’s Volcano Film and Video Festival, including a Shaolin monk gif:

Shaolin put together the ultimate marshal arts evenings with live links to the Shaolin monastry and clips from some of the maddest Shaolin and Wu Tang movies - they also screen many short films in the spirit of Shaolin with a variety of computer games on the big screen.

If you have any other information or memories about the club, let me know.

In the US, Brexit has become a shorthand for ‘Sorry your country failed’ | Arwa Mahdawi | Opinion | The Guardian
I'm glad I haven't been abroad since Brexit. British friends in the US are saying this has been their experience too.