Some things that I’ve done, watched, read and listened to this week.

This week in quasi-work… I spent a couple of days making these charts of series of books. That was a bit quicker than expected, which was satisfying. Maybe my brain is, finally, slowly rewiring itself enough that some of D3.js makes sense.

For the past couple of years, at least, I’ve been unable to make any changes to the CSS or JavaScript over on Pepys because the Gulp-based build system stopped working and I couldn’t face getting it going again. So I couldn’t easily fix anything. Modern web development is brilliant.

But last week I got it going again. I spent a day or so swearing at Makefiles before going back to Gulp and got a newer, simpler, better Gulpfile working so I could, at last, clear a backlog of little Pepys bugs. How we got to a stage where writing CSS and JavaScript involves spending a couple of days on the command line is beyond me.

With that working I could also make a new D3.js chart showing Samuel Pepys’ growing wealth over time. After more than 14 years there are still new things to add.

I also finished reading the latest edition of Two Scoops of Django which is full of handy learned-through-experience tips for building Django-backed websites. Very good, although I now have a list of things to change on a couple of sites. It never stops.

On telly… We finished season six of The Good Wife which I won’t say much about because I don’t want to spoil @AllSevenSeasons’ viewing. As ever though, easy and entertaining to watch, certainly not bad, but often infuriatingly nonsensical. Maybe The Good Wife is premium mediocre TV?

It’s also time for new seasons to start on old-fashioned broadcast TV. Grand Designs and Educating Greater Manchester are now both comforting in their sounds, visuals and formats. I’m pretty sure Kevin McCloud is ruder than he used to be, pretty much telling people mid-build that they’re idiots before, 95% of the time, ultimately describing their new home a triumph. At least he can admit he’s wrong I guess.

When the first Educating… series started it was brilliant to see what goes on in a comprehensive (or whatever they are these days) school. The kids with problems, the hard-working teachers, the fights, the breakthroughs, etc. But it does feel like that power is diminishing with each series because we know what we’ll get. Lots of dramatic moments, narrative arcs wrapped up in one episode, some heartbreaking and heartwarming moments, etc. It’s still interesting, just less surprising. Because they’re so similar it sometimes feels like we now accept that the bad features of the schools/kids/parents/society are just how things are, and unchangeable. It’s normal. I wonder what it’d be like to set a series in a good private school, as a contrast. I expect it would reinforce some prejudices and disabuse us of others. It might make us think of the bad features of state schools, “Oh, they don’t have to be like this.” Maybe. 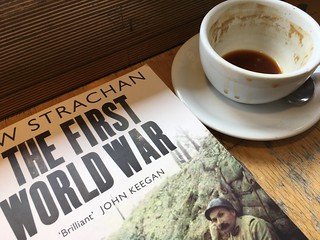 Books… This week I finished Hew Strachan’s The First World War which is very good. It confirmed how little I knew about the war, my images mainly being the mud and trenches of the western front. I didn’t know much about the eastern front, and how different that was, or the war in Africa, or in the Middle East. I hadn’t thought about how important transport was, or how tactics evolved during the war, or governments having to balance the number of men fighting versus the number of men making new weapons, vehicles and ammunition. Having to change how your country works in order to fight another.

Music… This week I listened a lot to LCD Soundsystem’s American Dream and Billie the Vision and the Dancers’ What’s the Matter With You Boy? (which I just now had to add to their Wikipedia page). Both are good in different ways. I know almost nothing about Billie… but I’ve enjoyed their albums a lot.

When I listen to LCD Soundsystem I imagine a group of pale, black-clad, grim-faced New Yorkers concentrating hard on playing everything just right, making the perfect rhythm, so that their leader doesn’t throw something at them. Later they will sit together silently in a dark bar, staring into their drinks, pondering the difficulties of life.

When I listen to Billie the Vision and the Dancers I imagine a group of friends in comfortable clothing, smiling at each other, having a lovely time, whether the song is jolly or sad. When someone makes a mistake they will laugh, shake their heads, and start again. Later they will cycle into the long Swedish summer evening and have a party by a lake with people from other nice bands.

Sometimes you need one, sometimes the other.

Smell of Data
File under "physical manifestations of internet activity". (via Prosthetic Knowledge)
Abandoned States: Places In Idyllic 1960s Postcards Have Transformed Into Scenes Of Abandonment : DCist
I'm a sucker for lined-up "now and then" photos and these of holiday spots in the Catskills are nice. (via The Online Photographer)
The Premium Mediocre Life of Maya Millennial
Once you've read about premium mediocre you realise it's a thing you see everywhere but hasn't yet defined. (via a few places)