I recently read the 2003 book Measuring America by Andro Linklater (Amazon UK, US). The subtitle, “How the United States Was Shaped By the Greatest Land Sale in History” is too flippantly dramatic to do the book justice. It’s a fascinating read, all about how and why the United States was mapped, starting in the east, working westwards, using nothing more than poles, chains and ever more elaborate brass instruments. Imagine measuring a continent, on foot, using long chains, hacking through the wilderness to get a clear line of sight from one position to the next.

There is also quite a bit about attempts to standardise and decimalise weights and measures, with varying levels of success. Sometimes this felt like a diversion from the main mapping narrative, and it didn’t grab me as much. But still, it’s an impressive story, explaining why so much of the continent looks like this bit of South Dakota: 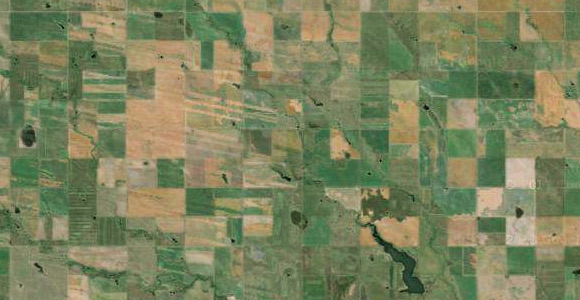 There are lots of fascinating nuggets in there, and these are some that I noted down as I went through…

All divisible by four, making calculations of area easier. In 1632 Edmund Gunter came up with the chain, combining this with decimals. (Decimals were described by Simon Stevin in 1585.)

So measurement could be done in decimals then converted to acres by dividing by ten. A cricket pitch is one chain long and US city blocks are often a multiple of chains in length.

Also, p.88, the daywork had equivalents in other countries: the journée in France, the Morgenland in Germany, the giornata in Italy, and the journal in Catalonia.

16-17 Sizes of measures used to vary: “what was being measured was not a quantity but its local subjective value.”

…the Latvians quoted a single price on the salt fish they sold to Russian merchants, Ukrainian nobility and their Hanseatic partners, but measured them out in different scales and containers according to the importance of the customer. … [In France] by using smaller containers to measure out flour in remote villages, traders could charge those far from the market the same price as those nearer to it.

17-18 Measurements like the palm and cubit derived from parts of the body, and so varied.

…still less exact, were units like the bowshot (the distance an arrow would fly), the houpée (how far a shout would carry) and, among the Plains Indians of the United States, the horse-belly view (the furthest a person could see over the prairies when squatting beneath a mustang — approximately two miles).

…Henry III in 1266, introduced the sterling system linking weights to coinage, so that there were 240 pennyweights to the pound, a ratio that persisted in the currency for over seven hundred years until 1972 in Britain… [but weights still varied, eg the Troy pound replaced the sterling pound in 1496]

21-22 Elizabeth I standardised weights and lengths in Britain and

…sent copies to fifty-eight market towns with instructions that a description of them was to be pinned up in every church and read during the service twice a year for the next four years.

[Noted for this being the method at the time of setting and publicising a standard.]

“People live so far apart,” the German immigrant Gottlieb Mittelberger complained in 1756, “that many have to walk a quarter or a half-hour just to reach their nearest neighbour.”

30-31 In New England [in 17th century?] surveying was different. Land was “granted in rectangular blocks, six or ten miles square, to an association or church which then allocated [square or rectangular blocks] to individuals.” Later proprietors used this model, rather than that used in Virginia.

“I have given up newspapers in exchange for Tacitus and Thucydides, for Newton and Euclid, and I find myself much happier.”

Although the legal tender remained officially the British pound, divided into twelve pennies, its value in America differed from one state to the next. The commonest single coin, the Spanish dollar, was worth five shillings in Georgia, but thirty-two shillings and sixpence across the border in South Carolina, and six shillings in New Hampshire, while the official London rate was four shillings and sixpence. Still more confusingly, it was divided into eight bits in Pennsylvania, but contained ten bits in Virginia. Along with Spanish dollars and doubloons, there were also French louis d’or and écus; Portuguese moidores, pistoles and half-Joes, so called because they carried the image of King Johannes V; Dutch florins; Swedish dollars or riksdallers; as well as the sovereigns, shillings and pennies of Britain.

95-6 The first measurement of France, by triangulation, a meridian from Dunkirk to Perpignan, was started in 1669 and finished in 1733. It was inaccurate so another team started re-measuring in 1738 and finished in 1789. A 120 year project.

171 Land sales in Georgia were even more corrupt than elsewhere. In early 19th century [?]:

The Surveyor-General’s office was discovered to have a box full of plats [plans] of imaginary thousand-acre properties which only required compass bearings and dates to be filled in to become apparently legal documents.

183 Surveying a 36 square mile township started from the south-east corner. “Shrewd speculators learned to avoid land in the north-west corner, because any errors in measurement showed up there, and that was where most arguments over boundaries occurred.”

199-200 The railroads required a depot every 12 or 15 miles, so that farms weren’t more than half a day’s journey away. They had a standard plan for towns, with the depot at the centre. Three 160-acre sections on each side of the track, each section split into forty-acre lots. Easy, quick and cheap to survey. Hundreds were laid out. North-south streets were numbered or given letters, east-west streets named after trees.

“In no civilised country have the cultivators of the soil adapted their home life so badly to the conditions of nature as have the people of our great Northwestern prairies,” wrote E.V. Smalley in the Atlantic Monthly in 1893. “Each family must live mainly by itself, and life, shut up in the little wooden farmhouses, cannot well be very cheerful … An alarming amount of insanity occurs in the new prairie states among farmers and their wives.”

What Smalley blamed were the squares. Each settler family tended to build near the centre of their holding, so that no field was too far from the house. Because the survey allocated no land for roads, they usually ran along the section lines, which left the average farm a quarter of a mile from the nearest road. On two neighbouring 160-acre claims, that meant half a mile between farms as the crow flew; but by road, down the track to the section line, along the section line and up the neighbour’s track, it was closer to a mile.

[You can read Smalley’s article online, as scans of the pages or as text (scroll down a bit).]