Last night we went to London Bridge to watch the light show that celebrated the opening of The Shard. The display can only be described as anti-climactic, but there was still a special sight worth watching: my friend and RIG colleague James Bridle carrying a home-made placard reading “ALL HAIL SAURON”: (If, like the young boy who was standing near me, you don’t get the reference, The Shard is said to resemble the tower of Sauron, the evil baddie in The Lord of the Rings.)

That’s not a great photo, but you can see how clearly James’s placard stands out over a crowd of spectators. People from some distance away could see it and read it and laugh along.

It shows that placards should exist outside their natural habitat of demonstration.

On a protest march, or any demonstration, there are plenty of placards but it sometimes seems they have little point. They make it clear in photos and on film what the protest is about, and get the message across to viewers at home. En masse they do create a greater spectacle than a placard-less march would create. But individually they have little power. On the ground, while you’re marching, most of the people who read your placard will be fellow marchers who, chances are, already agree with the sentiment.

For individual placards to have any effect, to be really noticeable, they need to exist outside of that context, among people who need persuading of the message. James’s placard showed that even among a huge crowd a single placard can have a big impact. If a placard was even more out of context its effect would be even greater. Why not carry a placard wherever you go?

Carrying big signs around the streets does, admittedly, bring to mind the image of, er, prophetic men wearing sandwich boards.

But that’s not what I’m talking about. There are two differences between THE END IS NIGH sandwich boards and my entirely sensible thoughts on carrying placards everywhere. No, really.

First, if that guy had been on London Bridge last night he wouldn’t have been noticed, and photographed, and socially shared, by nearly as many people. Hold your message high man! Where people can see it! Yes, you’ll need to use a hand or two but, come on, have some commitment to your cause!

Second, there’s the message. Traditionally, people carrying such signs down the high street focus on warnings of hellfire and apocalypse. These aren’t the topics you or I are likely to protest about. There are few marches to Trafalgar Square protesting against the end of the world. (“WHAT DON’T WE WANT? IMMINENT DAMNATION! WHEN DON’T WE WANT IT? NIGH!”)

I’d like to see people carrying placards, held high, as they go around their daily business, sharing messages they care about. The kinds of things they’d go on a protest about. Wars. The NHS. Capitalism. If 100,000 people march through London that is, indeed, big news for an afternoon. But if 100,000 people individually carried placards around their home towns for a week that would be… well, who knows.

Has some new outrage frustrated you today? Quickly change your placard before heading to the shops! Angered by some new banking scandal? Get out your anti-bank placard before picking up the kids from school! Protest as part of everyday life.

The closest precedent is probably t-shirts. One’s chest is traditionally the place to display a slogan while going about normal life, as best demonstrated by Katharine Hamnett’s 1984 ur-shirt: 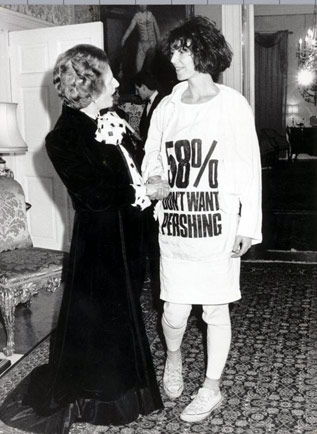 And it’s that which makes me think this placards-in-everyday-life idea isn’t entirely crazy. These days, wearing a political message on your chest is acceptable. Not for everyone, in every situation. But if someone can feel strongly enough to meet the prime minister in provocative typography, maybe walking to work carrying a placard isn’t too far out of the question. Because some days it feels like there’s nothing else you can do.