When I was at university we were set a project to use HyperCard on the few small-screened black-and-white Macs. I spent some time making a “stack”, as its interactive apps (to use today’s terminology) were called. Over 25 years later I can now run that stack in my web browser from the place it’s archived online. 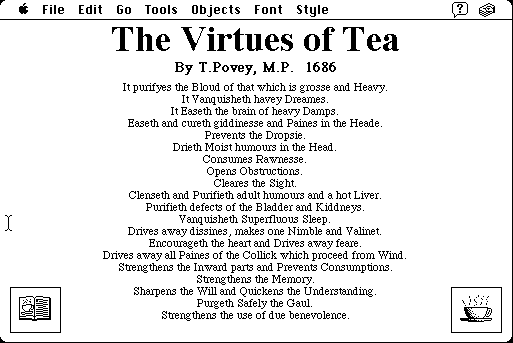 It takes a while but eventually an old Mac boots up in your browser and you can click the floppy disk icon named “disk”, and the “PhilTea” stack to open it. Some fonts are wrong, but still. My fault I’m sure. It seems unbelievable enough that an old Mac can run in my browser, Moore’s Law or not. But I’ve been transferring that file from Mac to Mac, along with other increasingly useless files, ever since the early ‘90s and assumed that I’d never be able to open it again. 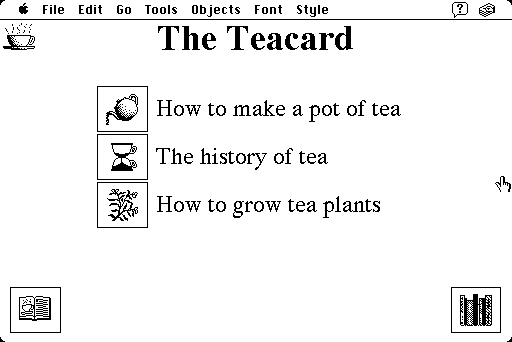 I think, after a struggle, I managed to open it a few years ago on my oldest Mac, running in Classic mode, but the fonts were even more broken and I couldn’t work out how to get any screenshots off the thing any more. 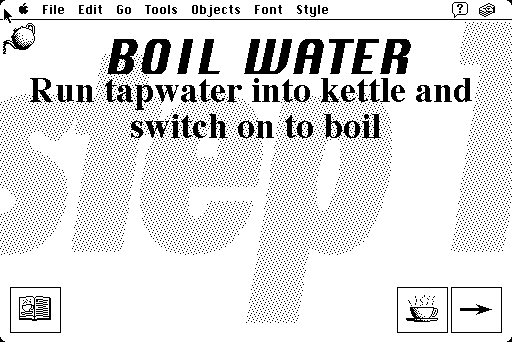 It’s not an especially thrilling stack and it’s not finished. But it was, really, unfinishable. Faced with a tool that could link one thing to another, I started off adding quotes about tea. Then adding brief biographies of the people quoted. I realised there was no end to this, linking from one thing to another to another… if I had enough time I could link to all the knowledge in the world, using tea as the jumping-off point. 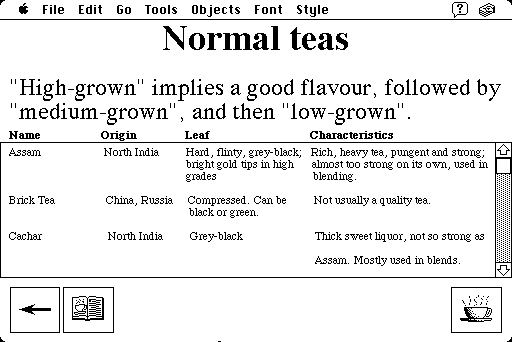 This was in 1991 or 1992, a few years before I got online, well before I’d heard of the web and its never-ending network of links. I would never say that I was independently as much of a genius as Vannevar Bush, Ted Nelson or Tim Berners-Lee rolled into one. No. 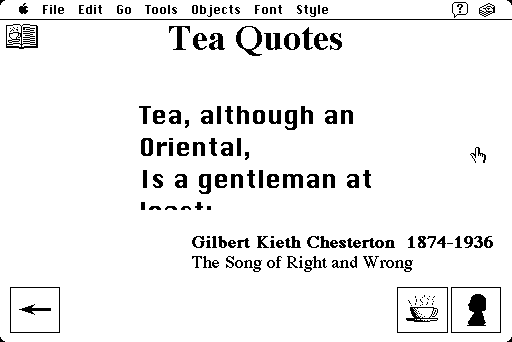 Anyway, it’s amazing to see, and use, this thing again given that some websites I made only a few years ago will no longer work without a lot of effort. I’m in awe of the Internet Archive and the HyperCard Online folks who have made it easy to upload stacks (and helped personally with rescuing my particular file). Amazing.