“Better late than never” is sometimes true. Here is some of what I did last year because if you’re reading this I assume you might be interested.

The first three months of 2015 — it seems longer ago — I was at Citizens Advice, part of a team working on an “Alpha” version of new information and services for both the general public and the employees and volunteers in their many bureaux. Lots of HTML, CSS, JavaScript, “UX” (I guess) and more PHP than anticipated, not that that’s a problem.

I left when my contract ended, and it was back to freelancing for the same reason I first went freelance in 2003: I couldn’t think what else to do.

First, I was at the lovely Failbetter Games creating new HTML, CSS and JavaScript templates for one of their games, making things work nicely on both desktop and mobile.

I spent quite a bit of time in the middle of 2015 building a new site for St Paul’s School. The fine-fingered folk at Clearleft had done all the talking and planning and designing, and created some beautiful HTML, CSS and JavaScript templates. I pulled those apart and put them back together with the PHP-based Craft CMS, writing a large amount of custom code along the way. Craft seems nice, and thoughtfully constructed.

As Autumn arrived I joined George Oates of Good, Form & Spectacle and Frankie Roberto to put together a nice new website for the British Museum’s Waddesdon Bequest. A nice exercise in massaging a lot of existing data and creating a means to easily explore it; not as an isolated digital experience, but also representing how the objects are displayed in the gallery itself. HTML, CSS and Javascript with a tiny bit of my rusty Ruby.

2015 was the first time I did some teaching, showing second-year design students at Goldsmiths how to make websites. We rapidly covered HTML, CSS and JavaScript and it was an interesting experience. Hopefully for them as well as me. I plan to write more about this. That might even happen.

As the end of the year approached, I spent a few weeks on a site that’s not live for the interesting thing that is The Sync Project, using the Flask Python framework and, again, of course, HTML, CSS and JavaScript.

And that was the work year, a busy one. I’m fortunate that every project involved learning something new. In some ways, long-term freelancing makes me feel like I’m not progressing: most projects are a similar scale and, while many peers have moved on, I’m still writing code. But, then, I get to dabble with a much wider variety of languages and frameworks and tools than I would in most full-time jobs. It’s an odd combination of variety and sameness.

The year disappeared before I got round to having a holiday. I didn’t leave England in 2015 — I barely even ventured outside London and Essex — and there were hardly any weeks that didn’t involve at least some work. Not good.

Last year I hoped to read, on average, one fiction and one non-fiction book each month, alongside the usual Sight & Sounds, and the London and New York Reviews of Books. I managed 14.5 fiction and 11 non-fiction, although most of the latter were fairly slim or light.

I went to the cinema 22 times. I’m aiming for 52 in 2016, in an effort to get out a bit more. Even if it’s “getting out” into dark rooms and sitting down. A film, Selective Listening, I acted in a couple of years earlier came out online and on DVD.

I went to seven gigs. Here’s some of the music I listened to most last year: 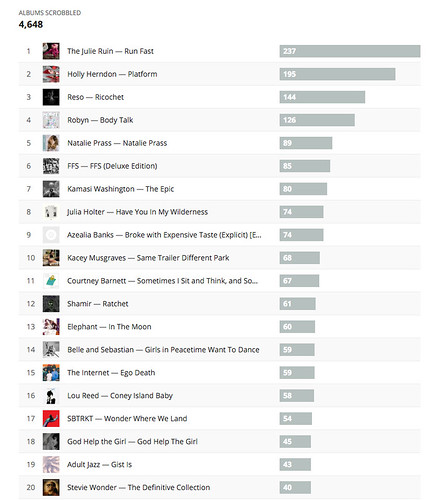 Online… @samuelpepys and, to a much lesser extent, Pepys’ Diary continued to use up about a day per month. My Crazy Walls and Our Incredible Journey Tumblrs continued ticking over. I failed to write lots more posts here. For the third, or maybe fourth, time I started work on a Django package to mirror my digital stuff — links, photos, check-ins, Tweets, etc. That’s only the first step in re-writing my website, and completing that seems a long way off, still.

There’s a huge amount I want to write — both code and normal words — but once work has eaten up so much energy there’s a limit to how much time I want to sit at a computer typing.