A while back I bought a copy of Practical Television from February 1952. It’s a fascinating look at a time when TVs were new technology and there were societies of people interested in what we might now call “hacking” with their TVs. 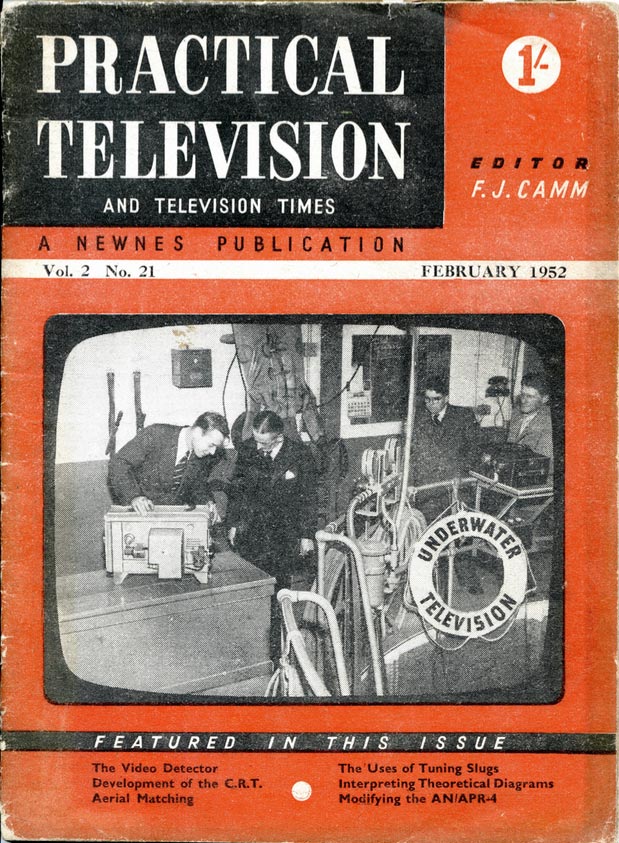 There are articles full of circuit diagrams like “From VCR97 to Magnetic-2; Converting a Receiver for Standard Tubes” and “Modifying the AN/APR-4”. There are also lengthy tips on getting the most from your Murphy Receiver and how to make a slotted indoor aerial for “fringe area reception without an elaborate outside array.” (There’s a lot of mention of “fringe areas” as presumably signal coverage was patchy.) It also has plenty of adverts for components and tools — valves, face plates, scanning coils, test meters — but none at all for televisions themselves.

For some context, one report mentions that in nearly three years the number of television licenses (required to own a TV set) has increased from 285,500 to 1,113,900, which is still less than 5% of today’s number. This is around 16 months before the coronation of Queen Elizabeth II which, in Britain, is seen as the moment TV-watching hit the big time. There was only a single TV channel to watch, the BBC, and it only broadcast for a few hours each day.

I’ve uploaded a scan of the magazine to the Internet Archive, and have also pulled out a few of the most interesting snippets below…

From “Televiews”, the introductory editorial page:

Some of the Sunday newspapers have been criticising a BBC producer because he declines to devote programme time to a talk on breathing as an aid to health. Some time ago this same producer was in trouble with the doctors because of his broadcasts on slimming for women. Perhaps this has made him cautious. We, however, support his decision for we do not believe that a talk on correct breathing would have been of interest since it is taught in every school.

From the “Telenews” section:

According to a Midlands electrical contractor, Mr. S. Dagnall, interference on television screens over the Christmas period may have been caused by the on-and-off flashing of fairy-lights on Christmas trees.

Suppressors could be fitted, but only at a cost of between 15s. to £1, and as this was not considered worth while, Mr. Dagnall refused to sell the lights.

Mr. J. Goodlatte, chief of the ABC cinema circuit, believes that the effect of television on box office takings in this country is only slight.

… Mr. Goodlatte praises the everyday housewife and places her second only to the films themselves as the cinema’s greatest ally. After a hard day at home it is she who most wants to go out for her entertainment.

It was recently announced in Hollywood, California, that a method of recording television images on a magnetic tape is expected to be ready for commercial use in a few months.

This system is the result of two years of research, financed by Bing Crosby.

Viewing in the Clouds

A British firm are planning a receiver for installing in airliners, to provide entertainment for passengers.

The biggest snag would be interference from the engines.

Appeal from the BBC

The BBC recently appealed for better behaviour from patrons at televised outside events where candid cameras take close-ups of crowds or where commentators hold interviews with people surging in the background.

Some viewers have complained about hand-waving or face-pulling from people who should know that they can be seen at home.

From “Underneath the Dipole”, subtitled “Television Pick-ups and Reflections”:

What a magnificent array of talent took part in the TV Christmas Party. Norman Wisdom, recently returned from America, … proved that his particular line of comedy is well suited to TV. When he was in America, he took a trip to Hollywood for a “look around,” and amongst other things was shown a television set by Stan Laurel which gave a choice of twelve programmes — most of them absolutely first-rate in entertainment value.

From “Here and There”:

An announcement is expected shortly from The Television Sports Advisory Committee concerning efforts that are being made to reach some agreement over the televising of sporting events.

The committee is expected to favour the broadcasting of all forms of sport and, if necessary, to televise only parts of matches, events or meetings should promoters not favour the transmission of whole programmes — that is, the first or second half only of a football match or one period of an ice-hockey game.

Some sporting associations have had no objection in the past to the televising of complete relays — the Lawn Tennis Association and the Rugby Union, for instance — but most promoting bodies feel that though the idea may have advertising qualities, the relaying of a complete afternoon’s sport would affect attendances and cash losses would be the inevitable result.

If only they could see how much sport broadcasting deals bring in today.

In a cable from California, U.S., where he is staying, “Wee Georgie Wood,” considers television in the United States to be a “menace to the country.”

That is the item in full.

Home - Annotator - Annotating the Web
"An open-source JavaScript library to easily add annotation functionality to any webpage." Used on hypothes.is.