I recently worked on a fun project with Six to Start to promote the new single from popular radio and gramophone recording artistes Muse. The website, Ununited Eurasia was a week-long treasure hunt requiring fans to solve puzzles and find USB keys in seven cities around the world. 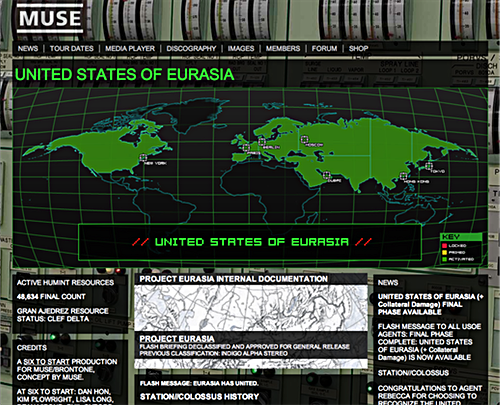 Six to Start have many more facts and figures about the project, which went from “from greenlight to live in one week”, including:

Phew. I tried to keep up with the fans posting on the forums, as they worked out what was happening while the hunt progressed, but I couldn’t manage it: over 27,000 messages were posted. I loved following fans on Twitter on the other side of the world, as they jostled to collect a USB key from a stranger, then seeing photos of the event appearing online. It was a lot of fun to watch.

I was responsible for building the backend of the site and it was a busy week. I used the CodeIgniter PHP framework for the first time and it was a delight to use. Most things Just Worked and, with some speedy typing, we were able to get everything working in time for launch.

Cars parked illegally in bike lanes in London - MyBikeLane.com
It's vehicles stopping in the advance cycle boxes that annoy me most, because it's so easy not to do.
Fujinon Binoculars
View Source. Scroll down. The HTML is something else. (via Haddock)
County of london plan 1945 - a set on Flickr
"excerpts from a small booklet explaining the ideas behind the official County of London Plan." Lovely.
Muse: Ununited Eurasia
Something I made recently with Six to Start, which went very well. It was a busy week.