A bit late with this, but still… Recently I was lucky enough to do some work on Shownar with the clever chaps at Schulze & Webb for the BBC. It’s a site that finds people having conversations about BBC TV and radio programmes online and works out which shows are surprisingly popular. Because you might want to watch them. 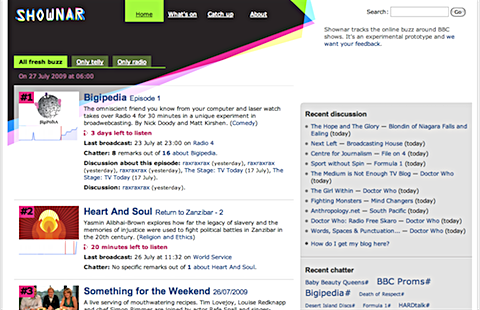 The idea scares me a bit because I already don’t have enough time to watch all the things on telly that I want, never mind listen to more radio, and if Shownar works it will only make me feel even more behind.

I worked on a lot of the initial planning — wireframing, helping work out what should go where and why, etc — and then worked on the front end: a smidgen of design and the HTML/CSS (but don’t look too closely at that; an iterative design process plays havoc with one’s markup).

Ultimately the clever and useful parts of the project are the data and algorithms behind the website and hopefully the ideas will be integrated with the rest of bbc.co.uk, rather than in a separate place. To that end Shownar is based on all those handy unique and permanent brand, series and episode identifiers used on iPlayer and /programmes (which I also worked on briefly a couple of years ago).

You can read more about Shownar by Dan Taylor at the BBC or Schulze & Webb’s Matt Webb or Tom Armitage.