Rush hour on the Barley Highway

I’ve been meaning to write about my new bike, a fixed-gear, for months. Now I’m in Paris and I’m enjoying the Parisians’ more relaxed attitude to cycling, and wondering why London cycling is so frantic.

Like the majority of casual British cyclists I used to ride a mountain bike (shown below). I gradually realised how unnecessary this was — I’d barely even seen a hill, never mind cycled up a mountain, in years — and wondered why we all do it. I guess it is, or was, fashion. I assume mountain bikes were the height of fashion at some point in the 1980s, when the only options for people who had grown out of BMX bikes was a drop-handlebar “racer” or a boring “sit-up-and-beg”. Then they became so ubiquitous that mountain bikes were beyond fashion and were simply just the standard choice. You want a bike? Here’s a mountain bike. 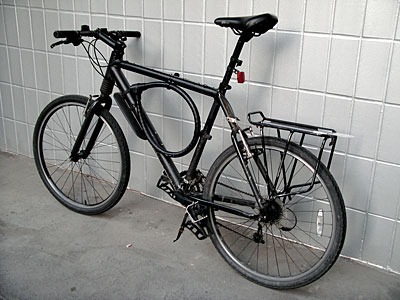 But I was irritated by my otherwise lovely Cannondale’s chunky wheels and the eighteen gears more than the three I ever used. Early last year I looked around, in the real world and online, and realised that bike messengers were mostly riding fixed-gear or single-speed road bikes, which have no gears. Single-speed bikes allow you to freewheel — stop pedalling — as you would on any normal bike while the pedals on fixed-gear bikes are always moving, whether your feet are on the pedals or not.

By the time I’d heard of these plenty of normal cyclists were buying such bikes and I thought I’d give it a go. I’ll let you decide wither this is me mindlessly following the fashions of early adopters or making a rational decision based on the innovative behaviour of lead users. Watching videos like that below may well lead you toward the former — I bet it’s not much different to the flavour of footage that persuaded people to start buying mountain bikes twenty years ago:

I first bought a very nice [single-speed bike](http://www.lemondbikes.com/bikes/track/classic_steel/fillmore.php “A Lemond Fillmore”) which I managed to have stolen within 24 hours. A few months later I tried again with a [fixed-gear](http://www.on-one-shop.co.uk/?page_id=591 “An One-One Il Pompino”) which is still with me. I was a bit nervous about the whole idea — a bike without gears, without even the ability to freewheel — but now, with the certainty that only spending £500 on something can give me, I can see the benefits. 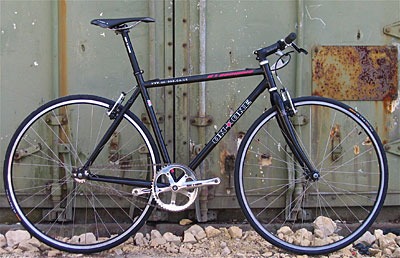 A bike the same as my new one but with flat handlebars instead of dropped.

First, the gears: I found that one is all I need. Living in London, and rarely venturing into the hilly wilds of north and south London, the only slope I have to climb is out of the underground car park. It’s slightly more difficult to get the bike moving than with extra low gear, but once you’re in motion there’s no problem. There have been a few occasions — zooming down long, straight, gentle inclines like High Holborn — when a higher gear wouldn’t go amiss but I charitably count this lack of very high speeds as a safety feature. Also, never thinking about changing gears makes cycling a much simpler and more enjoyable experience. The fixed-gear thing takes more getting used to. I was very careful the first few times out, after reading tales of inexperienced riders coming off their “fixies”. You unconsciously want to stop pedalling at certain points but if your legs try and do this while the pedals keep going, you’re heading for trouble. After a while though, my legs got used to the idea and now it seems strangely unnatural to ride a bike that allows freewheeling. There’s also the danger of catching a pedal on the kerb when squeezing past traffic, or having one catch the ground when zipping round a sharp corner, both of which I’ve largely managed to avoid. The other danger is when going fast downhill — your pedals will go very, very fast and your legs will need to keep up, which can be a little scary. There’s one aspect of the fixed-gear experience I haven’t even tried: it’s possible to stop the rear wheel turning by applying pressure backwards on the pedals. This takes some practice and pretty much requires your feet to be strapped to the pedals or for you to be wearing clip-in cycling shoes. The ability to do this officially counts as a brake, so you can legally ditch the normal rear brake which only adds to the ability to create beautiful and very minimal bikes like the one below. Being a cautious and sensible chap I’m sticking with the standard brakes. 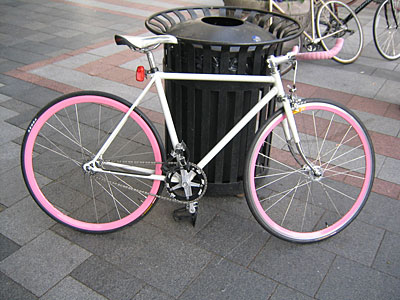 Although I’m used to the fixed-gear now, I’m still not entirely sold, unlike the single-speed aspect. With no desire to do the rear-wheel braking thing I’m missing out on part of the point, and with my tendency to stop at red lights (and my current inability to [track stand](http://en.wikipedia.org/wiki/Track_stand)) I interrupt the “flow” that fixed-gear enthusiasts talk of. Fixed-gear isn’t a bad thing but, for me, I’m not feeling any benefit. There is something in the feeling of being more “at one” with the bike — your legs always move when the bike’s moving — and with no free-wheeling ratchet the bike is always beautifully silent and smooth. But what’s _wrong_ with free-wheeling? Coasting along is the joyous pay-off for having to cycle up a gradient or built up some speed. The single-speed side of things works for me though. The bike is simpler, cycling is simpler, and I very rarely miss having extra gears. The rest of the bike is a pleasant change from the mountain bike too. Much lighter, even with my sensible load of mudguards and rear luggage rack, and with thin wheels it certainly _feels_ like less work. The downside of thin wheels and their tires is more punctures, one thing [jwz got right](http://jwz.livejournal.com/883988.html). I’ve mostly, thankfully, eliminated these by getting [better tires](http://bontrager.com/model/00443/en) but cycling through Shoreditch, where the gutters are artfully decorated with broken glass, is still a gamble. The drop handlebars I’m not sure about. I bought the bike with [Midge bars](http://www.63xc.com/mattc/midge.htm) which flare out more than standard drop bars, too much for cyling through tight traffic in my experience. Maybe it’s my stiff shoulders but it’s not a comfortable ride, although this is little different to how I felt on my mountain bike’s flat bars. Aside from this, it’s a thumbs up for the simplicity of single-speed bikes from me. Over the past couple of years I’m far from the only one who’s given this a go. Rush hour on the [Barley](http://en.wikipedia.org/wiki/Nathan_Barley) Highway (the route from east London along Hackney Road through Old Street into the city centre) is now full of beautiful, minimal, slimline bikes jostling for position among the overladen mountain bikes and the [London Fixed-gear and Single-speed forum](http://www.londonfgss.com/) has ballooned. For me, part of the appeal is the simplicity. It’s like shaving with an [old fashioned razor](http://www.classicshaving.com/Home.html) or a photographer [restricting themselves to a single type of lens](http://vothphoto.com/spotlight/articles/forgotten_lens/forgotten-lens.htm), feeling like one is eschewing modern complications for something that _just works_. Having barely left London in way too long, getting out just as far as Paris has reminded me of one reason why people travel: to get some perspective. I’d forgotten that when it comes to bikes not everywhere is like London (or, maybe, New York or San Francisco). Here in Paris everyone is riding boring old-fashioned upright bikes. I’ve seen thousands of these now and not just the hugely popular rentable [Velib](http://en.wikipedia.org/wiki/Velib). By contrast I’ve only seen a few mountain bikes or racing/road bikes, and maybe half a dozen fixed/single-speed bikes. Also, even fewer people are wearing helmets or any kind of fluorescent garment, never mind fancy lycra clothing or clicky-clacky shoes. I remembered, of course, that cycle path rich countries like the Netherlands are full of sensible normal bikes but if the population of the host of the Tour de France prefers comfortable, upright, slow cycling over the alternatives… why do the British insist on riding mountain or racing bikes, never mind this fashionable single-speed nonsense? Looking around at Parisians and tourists coasting through the traffic (not many cycle paths here) I can’t work out why the two cycling cultures are _so_ different. 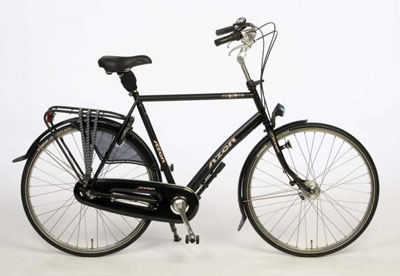 A sensible Dutch bike from Velorution

Is it just the pace of life? Do Londoners feel the need for the extra speed it’s hard to achieve when pedalling along with comfortably curved handlebars and a sprung saddle? But if you go to more relaxed places in the UK I bet mountain bikes still outnumber “old fashioned” bikes. Maybe we’re just suckers for fashion in Britain? Maybe we always want the new thing, something that must be better than whatever had served us fine for years? I can’t fully work this out. But I do love how relaxed Parisian cyclists look and I’m wondering whether I made the right choice after all. Or maybe I need to start a new trend for the best of both worlds: a fixed-gear bike coupled with high, curved handlebars and a comfortable saddle.